It’s hard to imagine what a chocolate rabbit has to do with anything in the religious realm. I mean, we’re not complaining — It’s a deliciously adorable Easter treat enjoyed by millions across the globe. But it’s just that, well, how did a milk chocolate mammal become the unofficial symbol of Christianity’s spring holiday?

According to Time, the origins of Easter can be traced back to the pagans who celebrated Eostre, the goddess of fertility. Of course, reproduction is what rabbits do best, so it’s fitting that Eostre’s animal symbol was a bunny.

Fast forward to the eighteenth century.

Christian holidays had long since taken favor over pagan holidays, but some of the symbols and imagery were reappropriated. Part of the tradition of the Easter holiday in Germany included the folklore of an egg-laying rabbit named “Osterhase” or “Oschter Haws.” As Germans immigrated to the United States in the 1700s, so too came their traditions. According to History.com, children created nests where the fictional holiday hare could lay its eggs.

German immigrants first settled in Pennsylvania, but their tradition soon spread across the country. Eventually, the Osterhase, or the Easter hare, expanded his Easter morning deliveries to good little girls and boys from traditional colored eggs to include chocolate — not in the least because Germans had recently made huge advancements in chocolate making. Germany quickly became known as one of the best manufacturers of molded chocolate in the world. Thus the Easter Hare began delivering molded chocolate, along with other candies and gifts, while Easter baskets eventually replaced Easter nests.

Chocolate bunnies gained mass appeal in 1890 when the Pennsylvania shop owner Robert Strohecker created a massive 5-foot-tall chocolate bunny and displayed it as an Easter promotion in his drug store. It worked so well, that other shops followed suit. Strohecker is widely considered to be the “Father of the chocolate Easter bunny.”

Today, it’s estimated that about ninety million chocolate Easter bunnies are produced worldwide. When it comes to eating them, 89% of people believe you should start with the ears. Just 5% begin with the tail.

The Easter bunny and the chocolate rabbit have become symbols of spring, making appearances at Christian and non-Christian households alike. About 87% of doting parents in the United States will buy or make Easter baskets for their children this year… And we’re willing to bet that 100% of those doting parents will proceed to steal candy from those baskets after their kids go to sleep.

Hey, that’s all part of the Easter tradition, too. 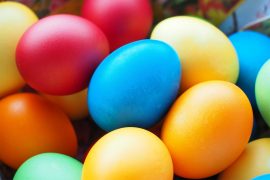 Is it safe to eat dyed Easter eggs?